Manifesto of the Gnostic Church of Christ-Lucifer

This written act proclaims the founding of the Gnostic Church of Christ-Lucifer as an autonomous religious community. The GCCL will operate publicly and be properly registered as a religious community in every country that has its own temples and clergy and where there are legal possibilities for such a conduct.

"Light and darkness, life and death, right and left - they are siblings to each other, it is impossible to separate them. Therefore, neither good is good, nor evil is evil, nor is life-life, nor is death-death. Therefore they will all be dissolved in their original sources. But those who are exalted above the world are eternal and insoluble. " - The Gnostic Gospel of Philip, Logion 10

α) GCCL (hereinafter referred to as the Church) is the first official Luciferian church founded in this (South Slavic) area. However, it is equally correct to call / describe GCCL as a Christian church.

In interpreting the Judeo-Christian religious-mystical tradition and mythology, the Church recognizes that Christ and Lucifer are one and the same being, just as it draws a sign of equality between Jehovah and Satan. However, both of these entities — Christ / Lucifer and Jehovah / Satan — are only two faces, two aspects, two manifestations of one Nameless God.

All this is, in turn, mythological / symbolic / intellectual, ie. the exoteric framework of our faith, while we hold that true, esoteric, unspeakable, but final and complete (non-intellectual) knowing of God is attained exclusively by following the devotional path of acausal knowing of the Heart. In other words, GCCL is a peculiar Western (European) variant of what is known in the East (in the Hindu Vedic tradition) as Bhakti-Yoga. Many consider this type of yoga to be essentially the most demanding form of yoga. A true bhakta (one who practices devotional yoga) lives in every moment in absolute devotion to the Divine, which he sees and feels in each and every thing - small and large, light and dark, good and bad, animated or apparently non-animated... A devotee burns with absolute love for each and every thing in the Universe, since they see everything as it is - a manifestation of the Divine, and thus strives to work, feel and think while maintaining all the time the awareness of God, his constant presence and manifestation. In this way bhakti yoga leads the one who is putting it into practice to the purest experience of God's Love and Wholeness. With all this in mind, it is quite clear how the teaching of Christ (Lucifer) is at its core bhakti-yoga in its purest form.

β) Although we take the Judeo-Christian tradition as the basis of our teachings and beliefs, Luciferian Christianity is essentially a syncretic religion of the New Age that allows the influences of different traditions to flow into it. The principles of Divine Illumination that guide us on our path of knowledge require us, as one sage said, to recognize and respect the Light first and foremost, not the one who carries it. Thus, for example, in the Holy Books of Luciferian Gnostic Christianity, in addition to the Old and New Testaments of the Christian Bible in the first place, we include many apocryphal Gnostic Gospels, the Holy Qur'an, the Bhagavad Gita, the Telematic Book of the Law, etc. In addition to this, every Luciferian Christian is a devoted student and researcher of countless mystical and occult teachings (currents). Unlike most religious people, the Luciferian Christian cultivates great respect for Science and the scientific method and does not see the conflict between it and his faith - on the contrary, they acquire knowledge from different scientific disciplines with equal zeal and is up to date with modern scientific achievements and information. One might think that all this is unnecessarily extensive and essentially irreconcilable, but by the grace and providence of the Lord Christ-Lucifer, our Church is one of the worthy guardians of the Universal Key that sums up and reconciles all these diverse teachings and knowledge spread along the long lines of space and time. and enables its members to find the priceless golden vein of true spiritual knowing and earthly wisdom hidden deep within the vast mountains of tradition and myth.

γ) The Gnostic Church of Christ-Lucifer is entered through the sacred rite of rebirth, ie. baptisms by water and spirit (Fire). Baptism can only be a voluntary act, and a person who expresses a desire to enter the Gnostic Church of Christ-Lucifer through the rite of baptism must be of legal age, or must have parental consent if he is between 13 and 18 years of age. Minors under the age of 13 cannot receive the sacred secret of baptism. In order for the Newborn (newly baptized believers) to remain a part of the Church after the baptismal rite, and to participate in its life, they must, above all, take part in the sacred mystery of the Eucharist (communion) during the Sunday Gnostic Mass and the annual Heretical Mass. In addition to this, Newborns are expected to acquire the knowledge necessary to participate in devotional and other services within the temple, as well as to be instructed in the canon and organization of the Church. In addition to other rites, the Church also performs the wedding rites of its members. Same-sex marriages are allowed in the church and are treated as equally dignified and sacred as marriages between heterosexual partners.

δ) The Gnostic Church of Christ-Lucifer accepts into its ranks all people regardless of racial, ethnic, national, ideological and class affiliation. GCCL is also tolerant in terms of belonging to another religion or mystical tradition, having in mind the universality of spiritual teachings and knowledge that the Church inherits. The GCHL considers itself the new universal religion of all mankind which has the potential to lead to the reconciliation and unification of all people on the basis of the noble principles it propagates and to be another of the seeds from which the Kingdom of Heaven on Earth will inevitably sprout. In this sense, GCCL has a sacred mission to, among other things, fight against everything that is dishonorable and inhuman, against all prejudices and discrimination arising from ideological, religious, but also scientific dogmatism. The Church is not involved in politics and discussions about politics within its temples are absolutely forbidden. Political affiliation or indifference in this sense is a personal matter of each person. The Church expects its members to respect the laws and authorities of the state in which they live - This, however, does not mean that the Church will judge negatively someone who has violated the law in his past, if he was held responsible for that crime or offense in accordance with state regulations - served a prison or other sentence. A person is automatically and irrevocably expelled from the ranks of the Church if they commit any of the crimes as aggravated murder, rape or a criminal offense directed against the constitutional and legal order of the state in which they live (treason).

ε) The Church is matriarchal in its hierarchical structure, which means that the Matriarch is at the head of the Church as the supreme religious leader. Such an organizational structure, among other things, aims to introduce, in terms of civilization a certain kind of balance into the collective consciousness after centuries of domination of patriarchal religious forms. The rest of the church structure is defined by the canons of the GCCL.

We can conclude that in human consciousness there has always been a notion of the cosmic struggle of opposing forces, whose reflections could be recognized everywhere in the nature inhabited by man, but also within his very soul. Christ / Lucifer represents those "forces against time" - he represents the Light, he represents the energy that nourishes all life, sustains all things and is their building, constructive element. Jehovah, who for us is one and the same being known as Satan. Jehovah / Satan represents those "forces of time" - it represents the Darkness, it represents the energy that breaks down and corrodes all that is material. Again, these two seemingly separate entities — Christ / Lucifer and Jehovah / Satan — are just two different faces of one, the Nameless God — whom we prefer to call the Oneness of Being. Both, Christ and Satan, are in fact divine representations, divine manifestations of what the alchemists called Sol and Luna; Taoists - Yin and Yang; Hermeticists - Electrical and Magnetic Fluid, etc. All these terms represent those universal polarities present in absolutely everything - small and large, animated and non-animated, microcosmic and macrocosmic. Without the interaction of these seemingly opposing forces, mere existence as we know it would not be possible. The ultimate manifestation of the universal principles discussed above is reflected in what we call Spirit and Matter. This, Matter - cannot be animated without Spirit - In return, Spirit cannot be expressed without Matter. Outside the unity of Spirit and Matter - there is only Non-Existence. Only the union of Spirit and Matter forms the Living Soul - the Seed from which it is obtained - Azoth - androgyne Prima Materia - Fiery Water, whose Fire manifests as the Fire of Salt / Sun (Electric Fluid / Yang aspect of Chi energy - in our body and everything else ) and whose Water manifests as the Water of the Moon / Moon (Magnetic Fluid / Yin aspect of Chi energy - in our body and everything else). Here, we can also say that Christ / Lucifer is Spirit, and Jehovah / Satan is Matter. 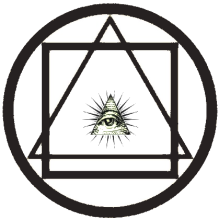 + I believe in a secret, inexpressible and indescribable God. The unborn and nameless God, the Father of life, the Immortal Spirit. Let us glorify Him - the Secret of Secrets whose word is CHAOS from which the ORDER of the Universe originated!

+ I believe in one Mother Earth of all, Baphomet-Babalon whose body is Pathei-Mathos - our path of knowledge through suffering and in whose cup we surrender our holy blood. We celebrate Mother Sophia in the cocoon of space-time where we are sown in decay for incorruptibility; in shame for glory; in weakness for strength; in the physical for the spiritual; in mortal for immortality!

+ I believe in one holy Gnostic Catholic Church - the Community of Saints.

+ I believe that food and drink are transformed into spiritual substance by the Light of Christ-Lucifer, so I acknowledge the Miracle of our Holy Gnostic Mass and Communion that nourish our immortality.

+ I confess one baptism of Wisdom with water and spirit that delivers us from the eternal circle of birth and death. And I acknowledge my life - one, individual and eternal which has been, is and will be through omnipresence, omnipotence and omniscience of unity with the Lord God.